ATTENTION ALL Co. B TROOPS

Even thought this is 58 days away, I would like to start finding out who will be at this training so that we can do the following and give you all time to mark your calenders and make plans to attend.

1. Keep the Capt. Devlin, Lt's Dipersio, Dugrenier and Kersting
up to date on who will be at the training weekend

2. Make sure we'll have enough area to set up and park at the
club for the weekend---remember we are guest and club
members will also want to use their ranges and
club facilities....
3. Let Bob Greenwood know how many troops he will be
cooking and feeding---Sat. Breakfast, Lunch, supper and
Sun. breakfast He needs to know how much food to order
for these meals..we need to know what it will cost.
I am hoping that we can, as a Unit --have something
other then hot dogs or hamburgers for the Sat. supper meal.
4. Let LT. Dipersio coordinate with Sgt's Haggerty & Volk,
giving them some lead time to put together the training we
will take part in during the weekend. especially as it
pertains to events like the Battleship Mass.Cove, Odessa,
Ike farm (possible event), Collings Foundation and the
Cape Cod Camp Edwards events....
5. Give LT. Dipersio, Sgt's Haggerty & Volk an idea on who
they can task as instructors for the training
6. Give me an idea on how many unit squad tents, wall tents
and tent fly's we'll need, so everyone will have a place to
sleep Sat. night...and hold the classes in...

Hope you all can make this training weekend in Aug. These training weekends are what helps us as a unit portraying B Co 104th, 26YD better at what we do to honor those who served
in B Co during WWII.... 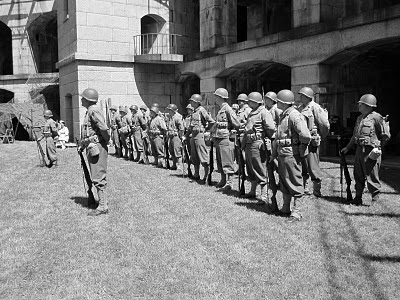 Springfield, MA. On Saturday, June 26 from 10:00 am – 5:00 pm at Springfield Armory National Historic Site – please join us for a very exciting day. Everyone is invited to experience a unique Native American POW WOW with dances, songs, games and drumming arranged as a special tribute to the Buffalo Soldiers. Spring-field Mayor Dominic Sarno will read a City Proclamation, acknowledging the important contributions of the Buffalo Soldiers. Artist and Iraq veteran, Tom Geas will dedicate his military statue to Iraq and Afghanistan veterans. There will be blank firing demonstrations of shoulder arms and cannon. The Armory Museum will stay open until 6:00 pm . There will be food vendors. If RAIN, the event will move to the Springfield Technical Community College gymnasium. Admission is free. Please call (413)-734-8551 for schedule and/or details.

Encampments are still a large part of Armory Day. Visitors converse with the Living History Reenactors who enthusiastically highlight their unit’s weapons and responsibilities in war time and explain how the weapons affected the outcome of battles during our Nation’s armed conflicts. Many reenactors will be in the company of their families who portray how civilians helped their soldier husbands during the Civil War.

Blank firing demonstrations of Revolutionary War and Civil War cannon, black powder Flintlocks and Percussion Rifles plus modern weapons are scheduled at 11:15am , 1:30 pm , and 3:30pm . Experience the blast of cannons and the sulfur smell of rotten eggs from the black powder firings.

Springfield Armory National Historic Site commemorates and preserves the site of our Nation’s first armory, established in 1794. The site of the repulse of Shays’ Rebellion, 1787; production of the nation’s first interchangeable parts; and home of the world’s largest historic American military firearms collection invites our visitors to share its history and beauty. As a unit of the National Park Service, the Visitor Center , Museum, buildings and grounds are open daily, 9 a.m. – 5 p.m. except Thanksgiving, Christmas and New Years Day. Admission is free. To browse our website, go to www.nps.gov/spar, or call us at: 413-734-8551 .

· Cannon firing to launch the event

10:30 Parade around the Perimeter of the Grounds

· All periods of Reenactors and the Native Americans march down tree path around the perimeter and back to the POW WOW area.

Black powder Springfield Armory Muskets and Rifles plus firearms used in Iraq and Afghanistan
Reenactors and active duty military are available to the public throughout the day. 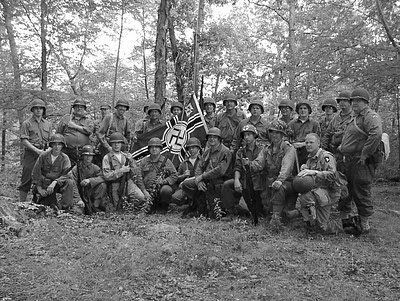 Public Event Coordinator Wanted
To the General membership,
The E-Board need to fill the position of Public Event Coordinator. The folowing is the job description:
A. will present to the Board for discussion any event of general interest to all the members of the organization and the unit.
B.Will present to the Board for discussion potential Unit activities.
C. will maintain an up to date calendar of approved events.
D. will ensure that the organization fulfills its goals and objectives through the educating of individuals and groups about the history of the United States during World War II.
Any member who feels this might be something they could do to help out the 26YDHRG. Please let the E-Board know and we will happy to vote you in at the next meeting.
Sincerely,
Carl Kersting
President
26YDHRG E-Board 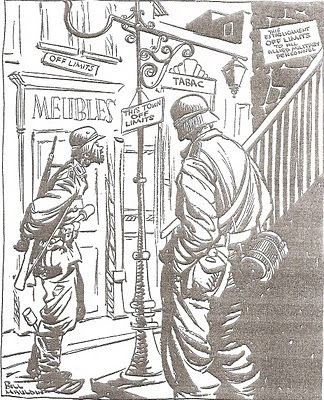 "They must have infiltratrd during the night"

In conjunction with the Annual