On June 13 2010 at approximately 1100-1200 hrs, Troops of B Company assembled for the Bunker Hill Parade in Charlestown MA. The Parade Kicked off at 12:30 hours and proceeded throughout charlestown. Troops from 1st, 2nd Platoon where deployed on either side of the half track, Troops from 2nd Platoon and Signal Section provided a Color Guard. The Yankee Division was well received by the people of charlestown.

18 out of 78 Troops from Company B where able to attend this Parade.

To those of you that came to enjoy the camaraderie of the event and the enthusiasm of the people, I Thank You. 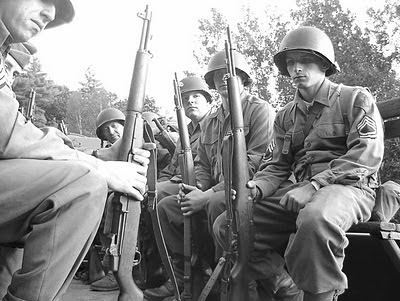 104th Infantry Regiments loaded up and ready to go

The show started of sunny--went to overcast and at around 2-2:30pm started to rain. 11 YD members were in attendance....
Many vehicles to look at, couple for sale, no one from the YD bought a vehicle but a couple were tempted.... CWO Bob was eyeing the landing craft all day..SSGT Brissette picked up a few things for his MC.

The unit had 4 displays and 2 vehicles at this show
TSgt. Campbell, Cpl. Earton and Pfc. Dugrenier
set up a Vietnam display with a jeep
Pvt. Jim Pereira
set up a really great (Award winning) Navy display
RC Nr. Chris Teixeira, assisted by her daughter in a white Navy uniform set up another really great (Award winning) display of Red Cross equipment, posters, uniforms and office equipment
LT. Dugrenier
set up his outstanding (Award winning)weapons display
he was assisted by Pvt. Mackoiak, Pvt. Recchia in full combat gear and weapon, along with SSgt. Brissette (in civilian attire)....
CWO Barber and I (1stSgt Mazz) set up shop around my WC51

For the time we had there --we were visited by many of those attending the event, we answered a lot of questions, passed out a few membership forms etc... As always, the YD Co.B made a great impression on those visiting and running the show. Even met a few old members of the 26YD --1 actual 104th member stopped by to chat ....
Chris & Jim, Brian and I were interviewed by a TV station that was filming at the show...about our displays...
Except for the rain starting around 2-2:30 all went really well.....we packed up at 2:30pm and left the show. The unit is invited back for next years show......
See you all at the next event.
1stSgt G.Mazz 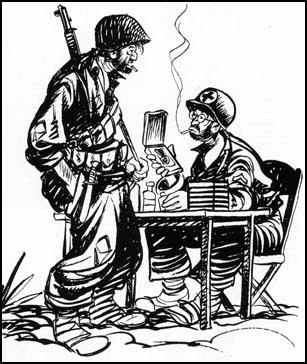 Just give me the asprin. I already got a Purple Heart

OK B Co. here's what is up next on the schedule..

1. Jun. 26---Springfield Armory display....Springfield,MA...
this is an Optional event-----
so far there are 5 going and 4 maybes---Capt. Devlin needs to know ASAP who can make this event and who is willing to be the point of contact...

3. July Mil.Veh show Norwich U., Norwich,Vt. Optional event. no headcount avail as yet...

IF You Haven't let me know
please do so ASAP on each of the above events.....especially for the Windsor Tactical--tents--food--beverages are dependent on how many sign up to be there...