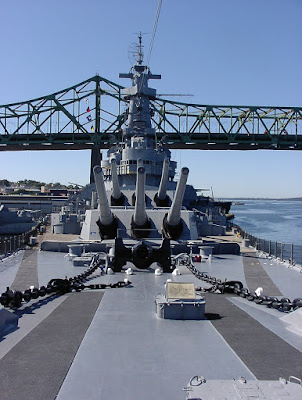 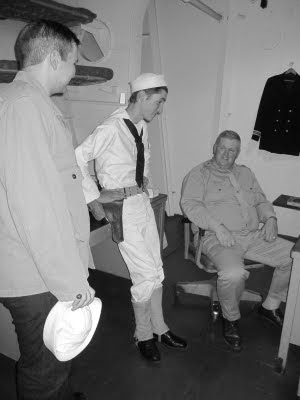 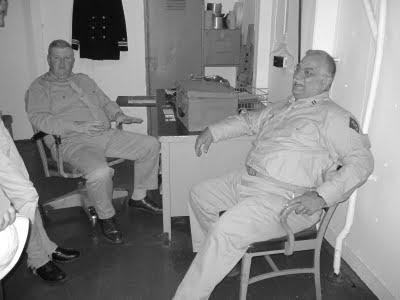 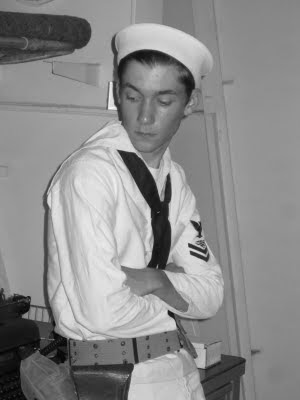 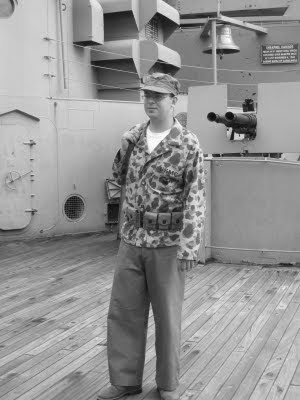 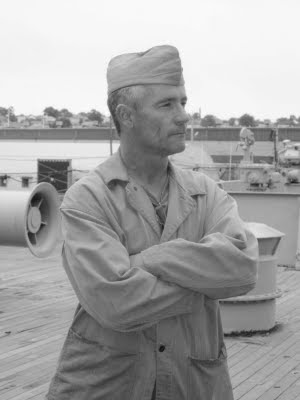 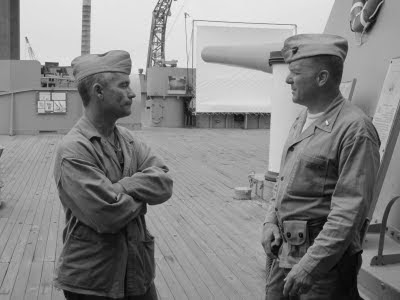 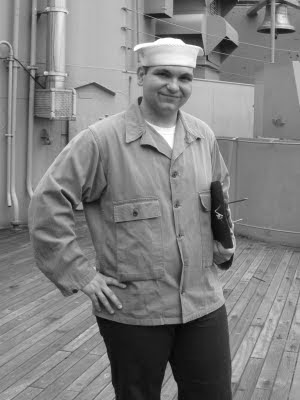 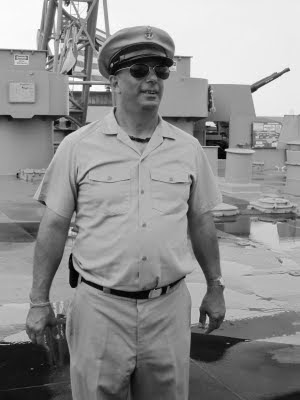 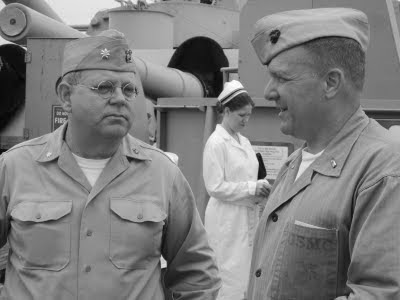 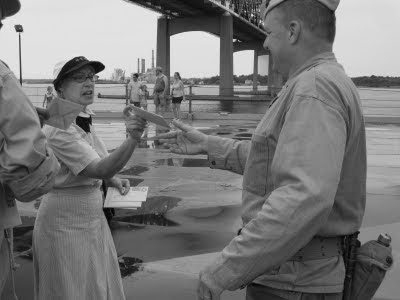 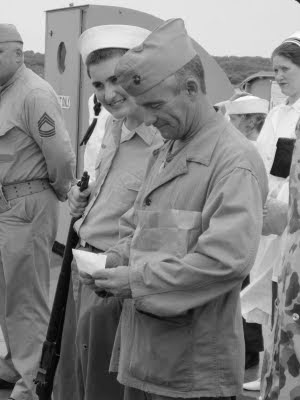 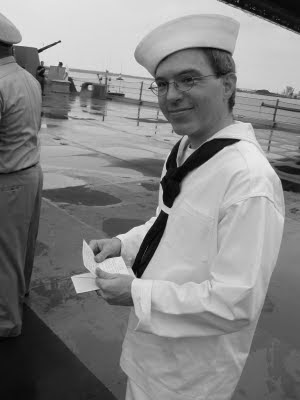 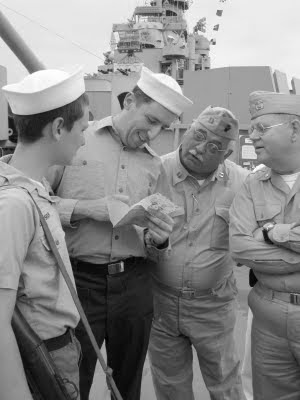 I received a letter from my girl 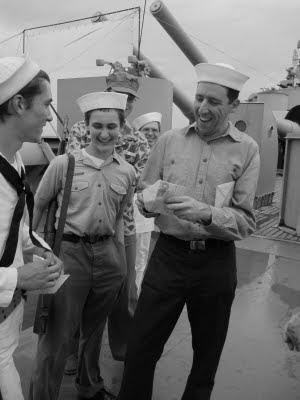 Hay you got a letter from my girl 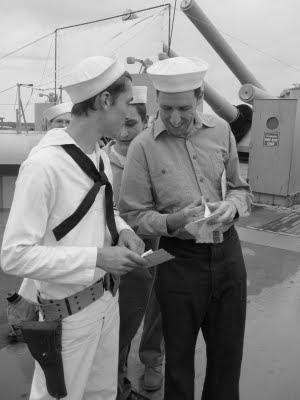 What she wright you 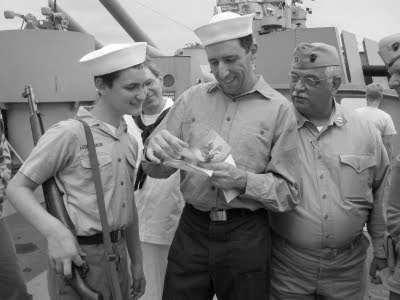 And a 2nd letter from another girl. 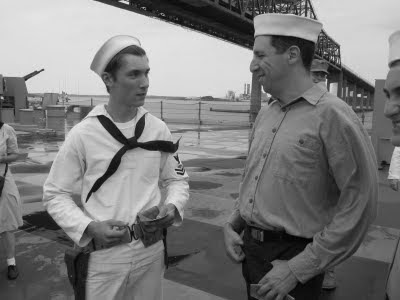 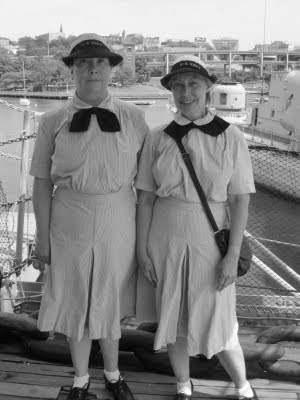 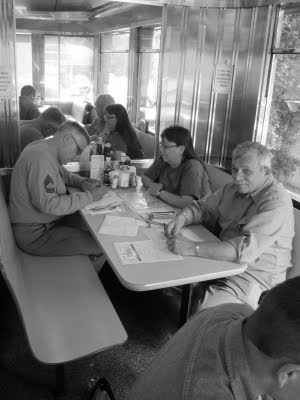 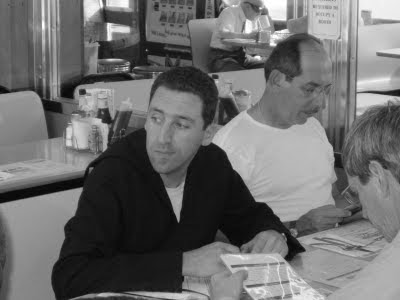 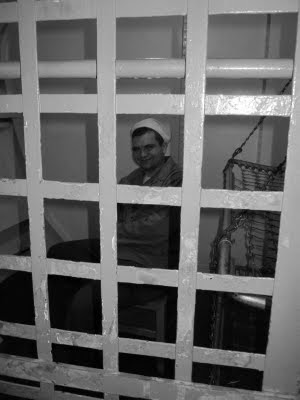 And found it.
YD Goes Navy After Action Report
Members,
This past weekend the YDHRG traveled to Fall River, Ma. and boarded the USS Massachusetts as Navy and Marine personel. As well as Army and various other branches. Displays were set up under the awning by turret #3. These were well recieved by the visiting public. At approx. 1000 hrs. the entire ships company was requested to observe and take part in a test of the new Pearl Harbor exhibit that will be unveiled to the public in August after the final tweeks are applied. So far so good. Once all the features are installed it should be quite the show. At one point I was looking for low flying aircraft. An E-board meeting was also held on Saturday afternoon. Capt. Devlin resigned his commision as of August 1, 2011. Lt Kersting was named acting CO for the remainder of this year. A new CO will be chosen at the general meeting in Oct. At 1700 once the ship was closed to the public, most went out to dinner at the local dinner not far from the ship. This was a good time with much comradere'. As I had other commitments on Sunday I then traveled home. A portion of the ships co. stayed overnight and continued displays and walking impressions.

E-board Meeting
Just letting everyone know that at the E-board meeting Sat. July 23,2011
Capt. George Devlin submitted his official resignation as CO of Bco. 104th IR 26YDHRG. The board accepted his letter of resignation and promoted me as acting CO for the remainder of his term. TSgt Devlin will now be 1st PltSgt for the ensuing term. May we all work to make this transition smooth and painless.
Respectfully,
1st Lt. Carl Kersting
Acting CO Bco. 104th IR 26YDHRG


Natick Mass Event
NATICK MA event is only 11-12 days from today.....
We need to know who is going to be at this event so we can make sure we have enough tents, food and drink available for all who show up.
Steve Keith will be doing the cooking for this event--he needs to know how many people he will be feeding Fri supper, Sat. & Sun breakfast to so he can purchase enough supplies so everyone will get something to eat--drink while at the event..price per meal TBA based on unit headcount....

Organizer of event need to know so they can plan for the FREE-Pig Roast Supper Sat. night...

I need to know so I can make sure there are enough squad tents etc there for you to sleep in Fri & Sat night..

OK--- I need to hear a YES---or ---NO reply by Mon. Aug 1st
so plans can be made... from the following members. (31 members)
If you all ready told me I'm sorry but I forgot to mark it down so please let me
know again---
THANKS for you cooperation with this request..look forward to hearing
from one and all....
click on Reply type Natick--Yes or No--click on Send..less then a minute of time

Collings Event
Troops ----all those who plan on going to this event have to contact Joe Mazzuchelli ASAP for a registration & waiver forms.
He needs to get them in ASAP.. Joe's email jammed366@comcast.net
GMaz Top

Note From the President
Dear Members,
We are coming up on a landmark for the YD. The first change of leadership since the E-board was formed in 2009. Please think about a position you may want to fill, or someone you may want to have fill those positions. Those members to be elected will have to be nominated. So if you wish to run for a position, make sure you have someone nominate you. Below is a list of those positions:
The YD-HRG E-Board as elected in 2009:
Three Year Term Expires 12/31/2011
President- Carl Kersting... 3 Year Term
Vice President- Joe Baril... 3 Year Term
Secretary- Chris Teixeira... 3 Year Term
Treasurer- Joe Mazzuchelli...3 Year Term
Unit Commander- Open....... 3 Year Term


The general membership meeting will be held at Collings this year.
Remember this is your YDHRG so plan to be there and do your part to help run this great organization. Regardless of what you decide please let me know if you plan to run and what position you are running for. Also let me know if you have someone in mind for a position. Thank you all.